Demand for at-risk group’s services higher than ever
NEWARK —

Skylar Tharp has felt the sting of words such as “weird” and “freak.”
Some of her classmates thought the attention deficit hyperactivity disorder she struggles with was a good excuse to make fun of her behind her back. When a friend told her what was being said, she descended into paranoia and tried hurting herself.
“I’m different from all the rest,” she said. “So, I became an outcast at school.”
It wasn’t until she stumbled upon the Prevent Assault and Violence Education program during a community service project that the Heath High School student began to have some hope.
“It’s helped some. I’ve learned ways to deal with it,” she said. “I’ve learned ways to be able to grow from that.”
Now in her third year in the program, known as PAVE, Skylar, 16, travels to local middle schools to talk to the students about the repercussions of bullying, as well as sexual assault, abuse and unhealthy body image.

PAVE students embrace each other after a presentation to Heath middle-schoolers about the negative effects of bullying./ Jessica Phelps/The Advocate
She’s met a group of teens who don’t care about what makes her different. They’d rather focus on their common goal — stopping violence.
It’s difficult for Skylar to imagine what her life would be like if PAVE didn’t exist.
But PAVE Coordinator Jan GreenRiver and her son, Asa GreenRiver, who serves as PAVE’s part-time assistant coordinator, are worried that could become a reality.
In October, the GreenRivers learned PAVE had lost the $60,000 grant that supplied the majority of its funding. There is a chance it will get the money back in the fall. But the group has to survive at least that long, Jan GreenRiver said.
Right now, PAVE is in limbo, and members are hoping to find a way to get enough money, fast enough, to make ends meet, she said.
The PAVErs try to put on a brave face. But when the GreenRivers told the the students about the grant funding, many of them cried.
“That was one of the worst things I’ve ever had to do,” GreenRiver said. ‘The bottom dropped out ‘
It’s easy to find the PAVE meeting inside Mental Health America. Try the room with the laughter spilling into the hallway.
PAVErs sit crowded around tables, sharing plates of chips, cupcakes and cinnamon bread. Their eyes scan their agenda — dated March 4 — when the group’s officers call the meeting to order.
Students volunteer to teach at Watkins Middle School, then they divide up to practice the skits and activities, which they presented there March 6 and 8. One of the group’s newest members
struggles to make a bullying skit relatable. With encouraging smiles, the PAVErs shout out suggestions.
Throughout the meeting, Jan GreenRiver encourages students to try to car pool or find rides to events so the group can minimize its transportation budget.
Asa GreenRiver passes out pledge sheets for a bowl-a-thon during spring break. He encourages students to get sponsors, knowing the money they raise will help keep things going a little longer.
It’s a different situation than what he and his mother were preparing for several months ago.
During the summer, requests for PAVE programs were pouring in from seven Licking County districts, Jan GreenRiver said. Some came from buildings the program never had visited before.
About 70 students showed up to the first Monday PAVE meeting of the school year. It was the group’s highest attendance number in years.
“We had huge plans for the year but then the bottom dropped out,” Jan GreenRiver said.
In September 2011, Congress allowed the Violence Against Women Act to expire without a replacement, she said.
That forced the Ohio Department of Heath to reduce its distribution of Rape Prevention Education Grants. PAVE was one of the programs that didn’t make the cut.
PAVE is sponsored by Mental Health America of Licking County, but the loss of state funding meant its almost $75,000 budget was cut to about $15,000. There’s some money from United Way and the Licking County Community Mental Health and Recovery Board. But that likely won’t be enough to cover salaries and transportation costs for the entire year, Jan GreenRiver said.
VAWA was reauthorized March 7, so PAVE might be able to get its grant back, shesaid. But PAVErs won’t find out until October, and the money won’t come in until November, she said.
“It’s just a matter of getting us there,” Jan GreenRiver said. “We have been able to still work because MHA does have some reserves but we’re not sure how long that can last.” Getting kids to listen
PAVE was started in 1994 as a way to stop violence by educating young people, said Paddy Kutz, executive director of MHA.
Then a freshman in high school, Bobby Persinger was one of the first PAVErs. His experiences lead him to a career working with youth through Pathways of Central Ohio.
It’s easy for kids to tune a teacher out. But when the message comes from their peers, they listen, he said.
According to survey data, the students who receive PAVE education are paying attention.
In September, the GreenRivers compiled responses from about 7,800 students who went through PAVE’s three middle school programs, as well as the high school program Asa GreenRiver teaches called RespectEd.
About 85 percent of the students said they liked the program. But more importantly, 95 percent said they learned something from it, Jan GreenRiver said. 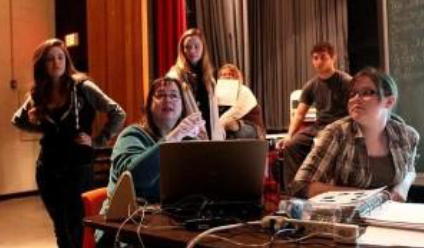 Penny Sitler Guest Columnist       You’ve most likely heard about the fire at Mental Health America’s YES Club on May 14. While our…