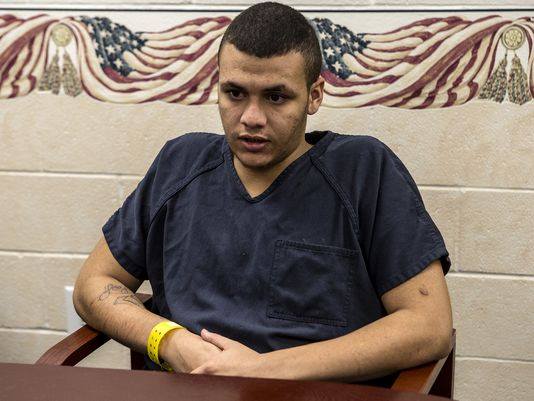 NEWARK – When he was booked into the Licking County Justice Center in October, Kevin Kelley knew he wanted to turn his life around and become a better man. But he wasn’t sure how.

Several months ago, a fellow inmate told him about a new jail program called Getting Ahead Stepping Stones, offered on Tuesday nights, and encouraged him to check it out.

The first time he walked into class, he met the program’s facilitator, Donna Gibson. As she spoke, he realized she was giving him the tools to get his life back on track.

Kelley, 20 said he’s tried Alcoholics Anonymous and Narcotics Anonymous, but nothing has motivated him like Stepping Stones has.

Now he’s talking about earning his GED certificate, going to college and finding a career.

He’s started meeting regularly with several other inmates after class to talk about their goals once they are released.

Over the last 13 weeks, Licking County Sheriff’s Lt. Chris Barbuto has noticed a change in Kelley and the more than 20 other men and women participating in the Stepping Stones program.

He’s hoping the information Gibson shares with them will help ease their transition as they leave the jail — and keep them from ever coming back.

“The program is all about them, to help and empower them,” Barbuto said. “So far, they’ve really taken it to heart.”

‘There is another way’

When inmates leave the jail, they often find themselves in a state of flux, Barbuto said.

Some don’t have a stable place to live and have trouble finding work. It’s easy to go back to old habits or slip through the cracks.

Several months ago, Barbuto began brainstorming with Jennifer Eveland, administrator of inmate programs, to find ways to stop inmates from getting stuck in the cycle of returning to jail.

“We really felt there was a need for a life skills-type of course, a self-empowerment program,” he said.

Eveland reached out to Gibson, the Bridges Out of Poverty and parent support coordinator at Mental Health America of Licking County.

Bridges Out of Poverty is a program designed to help reduce poverty in Licking County. One aspect is Getting Ahead, a series of classes that help educate low-income people about poverty and strategies to overcome it.

Sometimes, participants sign up for Getting Ahead after they’ve been released from jail or prison. But Gibson said she knows there’s a large population of people in the justice system who need help that she isn’t reaching.

When Eveland contacted MHA, Gibson and Executive Director Penny Sitler saw it as an opportunity. If they could get people involved in the program while they were in jail, they could continue the relationship, and help them find resources, once they got out.

“MHA’s whole mission is to improve the mental health and wellbeing of our community, and this is part of it,” Sitler said. “A lot of these folks have never been told there is another way. There is hope for a better life.”

After numerous meetings to rework the Getting Ahead curriculum, Barbuto and Eveland decided to pilot Stepping Stones with a group of the jail’s medium-classification male inmates.

Gibson was able to teach the classes through the sheriff’s office’s partnership with MHA. Funding for supplies came from the jail’s commissary fund.

After the first few weeks, the program was going so well, Gibson and Barbuto decided to start a second, separate class for female inmates. Now, about a dozen men and between 10 and 18 women come to the weekly gatherings.

Over the last few months, they’ve talked about job hunting, budgeting, healthy hobbies, soft skills and the various programs and support systems that will be there for them when they get out.

“I’m straight with them. It’s their choice if they come back here, and they need to make that choice,” Gibson said. “I’m not here to be their mother, but I can walk with them. I can be a resource.”

Every participant in the program is asked to come up with a plan and a strategy to meet their goals, Gibson said.

Some of the inmates have restored contact with their parents or loved ones. Others have decided to try to go back to school.

“I’m speaking to them, one on one,” Gibson said. “I keep telling them, ‘You don’t have to be here.’ I want them to get excited about the day they walk out of here.”

Gibson has been collecting data from participants since Stepping Stones started. Looking at her findings, she’s confident the program is working.

The inmates report their self-control and ability to cope with changes have improved and they have a better understanding of what resources are out there.

At the beginning of the program, only 50 percent of the participants said they were confident in their ability to make positive changes in their lives. Now 100 percent believe they can meet their goals.

Gibson said she’s also noticed other changes that are unmeasurable but just as important.

Participants are spending lots of time working on their goals and plans. They keep talking about the program, and the topics she’s discussing, after class is over.

Others said they feel encouraged, something they haven’t felt in a long time.

Now that Gibson has a large group of Stepping Stones participants inside the jail, she’s hoping to maintain those relationships once they are released.

So far, four women and two men have been participating in Getting Ahead classes since they left the jail. Gibson is hoping that number will increase in the next few months.

If the program continues to be a success, Barbuto and Eveland agreed they would consider expanding it and looking for grants and other funding opportunities.

“Most of our inmates live and work in our community. They are our friends, neighbors and family members,” Eveland said. “Our philosophy has been, if we can provide tools to them to help them make better decisions and cope better, ultimately that’s in everybody’s best interest.”

Diana Trago, of Hebron, is hoping to be released in May and is already planning to continue attending Getting Ahead classes at Mental Health America.

“Anything that empowers women to take control of our lives and get out of the system is a plus,” she said. “It’s great that these classes go beyond the jail.”

A regular participant in the weekly classes, she tries to encourage as many of the other inmates to participate as possible.

“I’m lucky I have a home to go to when I leave here. Some of these people don’t know where they are going,” she said. “They could go right back to the streets and the things they were doing that brought them here in the first place. But that can change if they can set up a plan to get on their feet.”

Going to jail was never part of Trago’s plan. But participating in Stepping Stones has helped her realize her life is far from over.

She said Gibson has helped her focus on going back to school and becoming a better wife and mother.

“She’s been very supportive. She supports us when we are here and when we leave here,” she said. “She’s helped bring a lot of joy and hope into a bad time in our lives.”