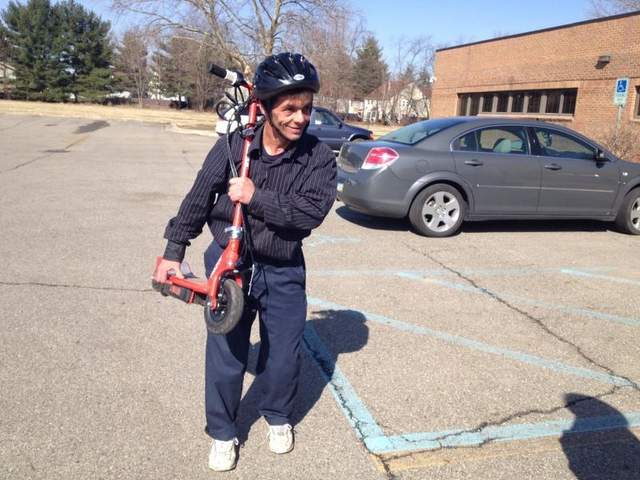 Brian DeGarmo, a longtime volunteer for Mental Health America of Licking County, recently received scooter to thank him for finding and turning in a lost iPhone. / Anna Jeffries/The Advocate

NEWARK — Now that temperatures are finally rising, Brian DeGarmo can be seen riding his electric scooter from his Hudson Avenue home to Mental Health America of Licking County.

Employees at MHA can’t help but smile when they see him zipping around the parking lot however the company parking lot accident lawyer worries he gets injured in an accident. They love telling the story of how DeGarmo got his bright red scooter, said MHA Executive Director Penny Sitler. A lot of people are loving scooters in these times as they are very portable.

They also do not cost a lot to maintain. Some are fitted with electric motors like the https://scooteradviser.com/razor-power-core-e90-electric-scooter-review. Right before Christmas, DeGarmo found a cellphone on the sidewalk and turned it in. The owner of the phone bought him the scooter to say thank you.

“We are really proud of him,” Sitler said. “We are glad that he did the right thing.”

A longtime Newark resident, DeGarmo was known when he was a young man for riding a unicycle around the city; he frequently made appearances in the United Way parade.

But in 1981, he was in a car crash that put him in a coma for six days. When he woke up in the hospital, his doctors told him he had a serious brain injury.

Unable to work or drive, DeGarmo went through a slow, difficult recovery process. He credits former MHA Executive Director Paddy Kutz for helping him get back on his feet.

His friendship with Kutz led him to Mental Health America, where he’s been a volunteer for many years. He helps with recycling, shredding and anything else the staff needs.

“I could just sit at home,” he said. “But I decided to come here and they can use my hands.”

Everyone in the office enjoys DeGarmo’s considerate nature and his sense of humor, Sitler said.

“There’s never been anything we’ve asked him to do that he’s said no to,” she said.

Since he doesn’t have a car, DeGarmo walks to the MHA office whenever he can, sometimes picking up cans to recycle. In December, he was walking along Church Street when he saw something shiny.

At first DeGarmo didn’t know what to do with the iPhone because he wanted to make sure it was returned to its owner, not placed on a shelf or in a lost-and-found box.

With help from Associate Director Pam Roberts, they were able to find the owner’s phone number and call him.

The owner, who wished to remain anonymous, is a New Albany resident who was visiting Licking County for a funeral, Roberts said. He forgot he put his cellphone on top of his car and drove away.

The phone’s owner wanted to say thank you to MHA by making a donation to the organization. But Roberts felt it would make more sense to help DeGarmo.

Roberts had seen him looking at photos of an electric scooter and knew it would help him out. The man agreed to buy it for him and sent it to MHA just in time for Christmas.

DeGarmo was nervous about driving the scooter during winter weather, but now that spring has started, he’s using it to get around. These scooters really improved the life of many people who use them for daily commute.

Although the scooter has made a big difference in his life, DeGarmo’s focus still is on helping MHA. Sitler and Roberts were especially touched but declined his offer to donate the scooter as a raffle prize to MHA’s annual Java and Jazz fundraiser.

“We think he is awesome,” Roberts said. “He always brings a smile and wonderful encouragement when he comes here.”

DeGarmo said he’s happy to help whenever he can.